There will always be differences between the design model and the manufacturing model. Zero article inspection answers the important and potentially costly question:

Are differences between the design and manufacturing model acceptable?

What is zero article inspection?

In a digital enterprise or MBE environment, before producing a physical part, the last digital representation of that part is the 3D geometry and PMI available prior to tool path generation, machine coding, or chip cutting.

In a digital enterprise or MBE environment, the objective is to directly reuse the “master” model, containing both geometry and product and manufacturing information (PMI), for downstream purposes. However, the downstream functions often don’t use the “master” model itself, but instead use some derivative of that model. Depending on how the data is handed off between design and manufacturing, the “master” model may be translated or even completely remodeled, creating a disconnect between the design and the manufacturing models, and increasing the potential for variation of the geometry and/or the PMI between the two models.

If the first physical part off the line goes through “first article inspection”, it makes sense to call the review of the last digital representation of a part – the model used by the manufacturing or inspection software, “Zero Article Inspection™” since it comes just before the first article is produced.

Zero Article Inspection™, or ZAI™, is a concept coined by the experts at ITI, as a result of close collaboration with customers, PLM vendors and industry consortia. ZAI aims to ensure that the manufacturing model used to generate tool paths or inspection routines matches the “master” design model, or at least that any differences between the two models are identified and deemed to be insignificant.

Variations in the nominal geometry and PMI (product and manufacturing information) handed off between design and manufacturing raise the question, “Why?” Suddenly, revision control issues, methods of incorporating changes, and potential for downstream modeling changes are evident. This is why zero article inspection is important, if not critical, to any MBE process.

ZAI is a critical step in a product’s lifecycle - at the intersection of design and manufacturing - where the geometry and PMI can be scrutinized and validated. It is early enough in the process for manufacturers and suppliers to realize significant time, cost, and quality benefits -- and most importantly to avoid FAI failure caused by design to manufacturing model changes. 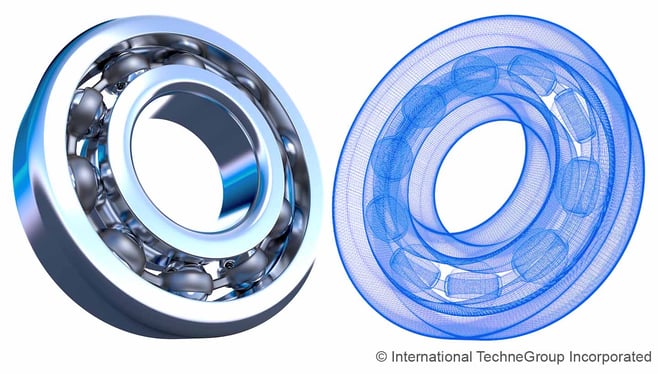 If manufacturing and design models are equivalent, they contain only negligible variations and will pass first article inspection. But like human identical twins, a digital twin may have slight yet significant differences that are not apparent on visual inspection. Therefore, engineers need a way to discern if the variations in 3D models are significant or negligible before first article inspection.

When a part fails first article inspection, delays in the overall schedule are expected and rework is usually required both upstream and downstream. If the first parts are supposed to roll into your second, third, or hundredth parts, then you appreciate the exponential – and potentially very costly - impact of such a delay.

When the 3D model is moved through the digital enterprise, there are several sources of variation that can be introduced between design and manufacturing. The 3D design model and the 3D manufacturing model should be digital twins with only negligible variations. Issues such as out of synch versions, diverging modifications, and human negligence typically are not identified until first article inspection. And if they are missed, they can cause expensive product warranty issues, product recalls, or worse.

When ZAI is added to your manufacturing process, model variations can be identified early, and dispositioned more efficiently and at a much lower cost than after FAI or later

1. Initial handoff
Translation changes made to the digital model during the initial handoff from design to manufacturing 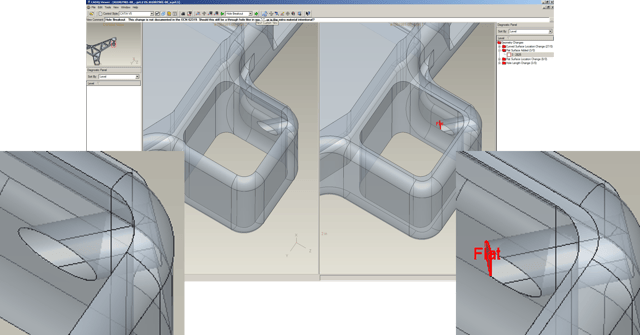 An unintentional change to a hole is identified by CADIQ (on right).

2. Manufacturing changes
Changes made to the digital manufacturing model after the initial handoff 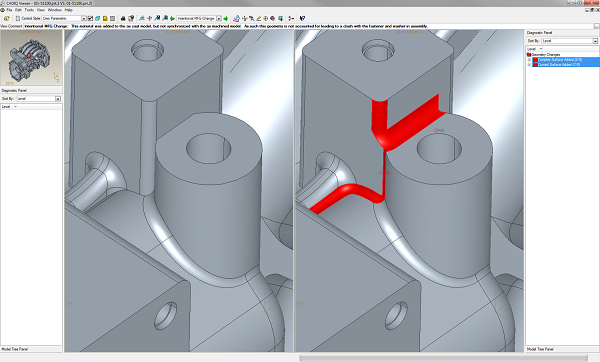 3. Design changes
Changes made to the digital design model after the initial handoff

Design change example: When adding material, this fillet failed. The designer suppressed the original geometry, and then re-created a new fillet. This was considered model clean-up and was undocumented.

Regardless of where, how, or who makes a change to the design or manufacturing model, these sources of variation are possible whether the product lifecycle environment is multi-CAD or single-CAD, and whether the manufacturing team is directly reusing a design model or remodeling it. The effect can be minimized in a single-CAD environment but never completely eliminated.

This blog makes the case that zero article inspection will integrate design and manufacturing teams earlier in the process and facilitate dispositioning discussions at a point where costs are much lower than if conducted downstream.